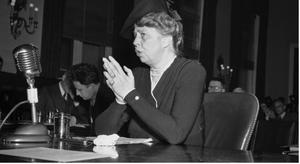 First lady Eleanor Roosevelt (1884-1962), wife of Franklin D. Roosevelt (1882-1945), the U.S. president from 1933 to 1945, was a leader in her own right and involved in numerous humanitarian causes throughout her life. Learn more about her!
The niece of President Theodore Roosevelt (1858-1919), Eleanor was born into a wealthy New York family. She married Franklin Roosevelt, her fifth cousin once removed, in 1905. By the 1920s, Roosevelt, who raised five children, was involved in Democratic Party politics and numerous social reform organizations. In the White House, she was one of the most active first ladies in history and worked for political, racial and social justice. After President Roosevelt’s death, Eleanor was a delegate to the United Nations and continued to serve as an advocate for a wide range of human rights issues. She remained active in Democratic causes and was a prolific writer until her death at age 78.